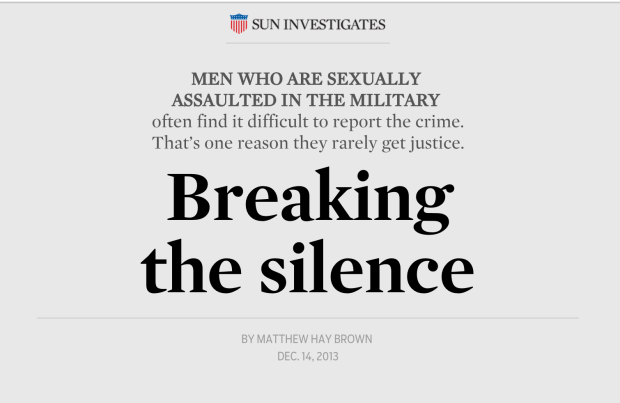 The Baltimore Sun’s “Breaking the Silence” project picked up on a frequently reported theme of sexual assaults in the military. But this time, the victims were not young female recruits. They are men. Shockingly, the story found that more men than women suffer sexual harassment and assault and are far less likely to report the attacks. A tiny fraction of the cases end up in an investigation. While fewer women were assaulted, the women are eight times more likely to report the incident. The Sun found:

These men — an estimated 13,900 last year alone — are far less likely than women to report an attack. Only 13 percent of reports last year were filed by men, military data show.”

The Sun’s investigation included profiles of seven men who said they were sexually assaulted while serving in the military between the late 1970’s and 2009. The victims agreed to talk and be identified, which makes their stories even more powerful and believable. 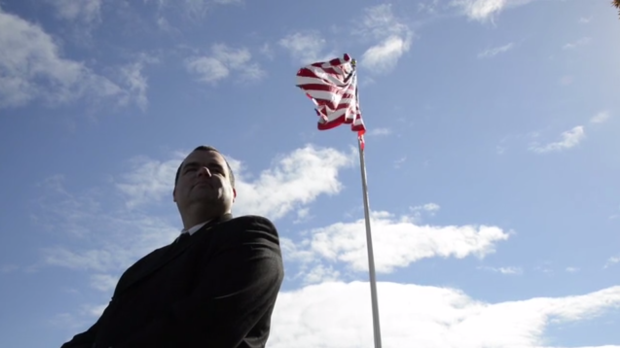 The project includes interactive charts that allow the user to explore the data. 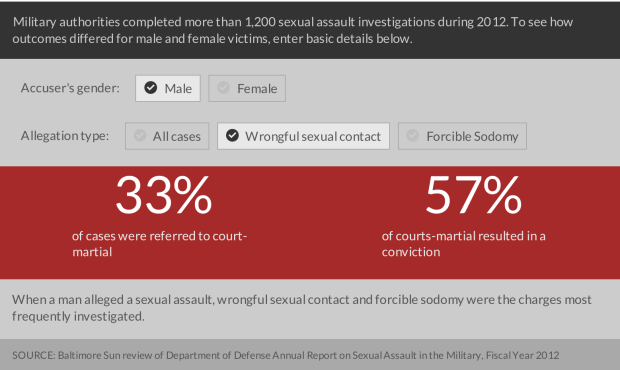 The charts show the sad data:

“When there is an investigation, cases with male victims are less likely to be sent to court-martial, The Sun found. Of investigations completed in 2012 into assaults on men, 28 percent resulted in sex offense charges being sent to a court-martial. For women, the figure was 42 percent. One reason for that disparity is the greater reluctance of male victims to cooperate with investigators, the data show.”

The project does a nice job of building profiles on each of the victims in the story. The user can pick on a mosaic tile and a bio flies out to the middle of the screen:

But this project is far from what it could have been.

I would have liked to have heard, at minimum, audio reports on each one of the victims. It could have been achieved by embedding audio on each of their bio pages. Even something as simple as a SoundCloud file would have been enough.
I would have liked to have seen a path, a chart of how their cases progressed through the system compared to how they should have progressed. And In the cases that did get prosecuted, what do we or could we have known about what happened to the accused?
Brian Lewis, the main character in the story, testified before the Senate Armed Services subcommittee on personnel. I wonder why they didn’t link to that testimony, including video?
There was no video or audio of Sen. Kirsten Gillibrand who has been a vocal critic of the current system and has demanded reform. There was no central focus on whoever is blocking this problem from getting fixed. Who or what is to blame here?

Did the story miss the main issue?

The story makes a passing reference to how the military’s Don’t Ask; Don’t Tell policy may have been at the core of the unreported attacks on male military members. That policy was repealed in 2011 and, the Sun reported, “More than 3,550 sexual assaults were reported during the first three quarters of the 2013 fiscal year, the Pentagon said last month, a jump of nearly 50 percent.”

To me, this is the core of the story. The military’s own internal policy that forbid gays to serve in the military may have also built a culture of secrecy that prevented the reporting of criminal sexual assaults.

Interestingly, data released last week by the Department of Justice found that:

“The 2012 Workplace and Gender Relations Survey (WGRA) results and the 2014 RAND Military Workplace Study (MWS) PRELIMINARY results showed over half of victims who reported a sexual assault perceived some kind of retaliation either by peers, coworkers or the chain of command; RAND: Of the women who experienced Unwanted Sexual Contact and made a report to a DoD authority, 62% perceived some kind of professional retaliation (32%), social retaliation (53%), adverse administrative action (35%), and/or punishment (11%) [Data not reportable for men.]”[1]

Note the last line of that passage. The DoD, even following the Baltimore Sun’s reporting, still has no data on how often a victim suffers reprisal after he reports the assault.

And even last year, one in ten women and two of every hundred men say they suffered sexual harassment or assault while in military academies. [2]

With that in mind, the Baltimore Sun’s project should have, at minimum, included links to the government websites that help victims to report crimes in the military. Those resources could have included links, a briefing on what the counselors or military will want to know and what to do or not do if you are an assault victim. [3]

This story is not the first to have taken on the issue of male sexual assault in the military. In 2013, a feature film, “Justice Denied” featured several stories of rape victims who told similar tales that the Sun did a year later. 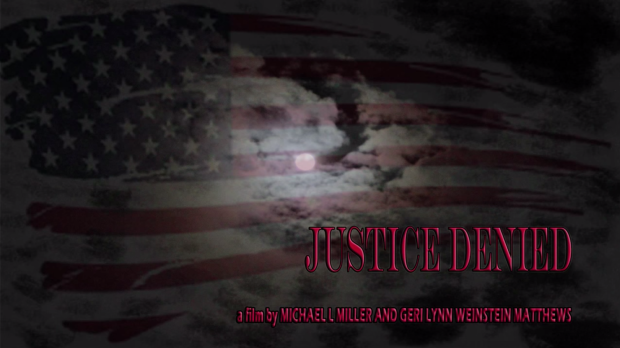 That movie went further into the mental health implications than the Sun’s project did. While the reporting is significantly thinner the video storytelling was emotional and heart wrenching. The Sun could have used more of that emotional connection to deliver the deep statistical analysis the Sun’s story provided. 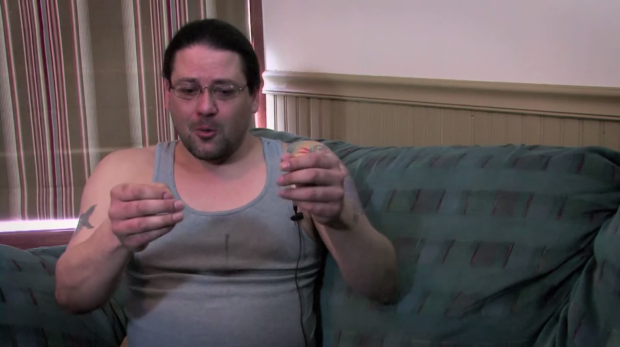 Once again I was left with the question of why the Sun didn’t point to the movie or mention is at all. And make no mistake; male rapes do contribute to the veteran suicide rate in America. CNN found:

“There’s an assumption that rape doesn’t happen to men, or they must have been weak and not strong enough to fight (an assailant) off,”’ says Sue Garrison, a psychologist at the Bay Pines VA Healthcare System in Florida.

Bay Pines is the only Department of Veterans Affairs facility in America that offers residential treatment for male victims of military sexual assault as well as women. Evidence suggests that men may suffer more severe symptoms and are less likely to get help, raising the specter of other problems, like suicide.”[5]

This is a wonderfully worthwhile subject that the Sun treated with respect. But the online version of the story didn’t use all of the tools it had available to hold the system accountable, tell the stories of the men the paper interviewed or trace the progress of their cases. It also failed to provide the resources that might help other victims.