New research by The Poynter Institute shows that there are two main ways that people use their tablets.

The study, by Sara Quinn, says the groups are either “intimate readers,” who intensely read and interact with their screens or “detached” users who plunk lots of text on their screen and never interact with it while they consume the content.

An average of 18 items were viewed before people made the first selection to read. This means that some headlines or images on the fronts might have been looked at multiple times before the study participant made a choice to read something by tapping it.

While many text stories were read to completion, an overall average of a minute and a half (98.3 seconds) was spent on the first story a person selected to read. Of the people who did not finish reading a story, they read for an average of 78.3 seconds before leaving the story entirely. We’ve been calling this the “bailer’s point” and it might be a good benchmark for establishing a “gold coin” like a simple pullout quote or visual element that keeps the reader engaged about halfway through a long story. We will write about this in more detail next week. 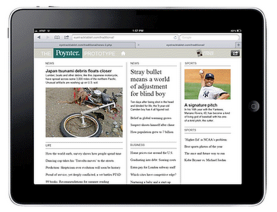 70% of tablet users studied said they liked to read their devices in a horizontal rather than vertical position.

The Poynter study found that 70% of the users read their tablets in a horizontal rather than vertical position.
The study found:

Their overall choice has a lot to do with the screen dimension for watching videos, they said. These factors are important as news organizations determine the resources they need to devote to creating and design content in multiple modes.​

Readers have an overwhelming instinct to swipe horizontally through a full screen photo gallery, regardless of portrait of landscape orientation, as we reported previously.

The study also affirmed previous studies that said photographs and other graphic elements were key reasons that people chose to “enter” a story. Photographs that included faces were especially attractive to users.

Poynter’s study focused on full-size Apple iPads, despite the fast-growing range of tablet devices on the market — including smaller, more affordable tablets such as the Kindle Fire HD and Google’s Nexus 7. Researchers said they chose the full-sized tablets because they dominate the market, for now. Researchers said further study will be needed to know how a smaller screen size affects navigation.

One of the most useful findings may be that the study, which used eye-tracking technology that measure eye movement, shows users tend to complete reading the first story they choose. Overall, tablet readers spent a total of 98.3 seconds, about a minute and a half on the first story they click on. Quinn said the study found what she calls “a bailer’s point” which occurs about 78 seconds into the reading experience. To hold the reader for another 20 seconds, she says, tablet designers should consider a visual element such as a chart, graphic, photo or pull-quote to re-engage the reader.

Read more:
Why do tablet users “swipe?”
Read the Facebook page set up to discuss the study.
Storify coverage as the researchers roll out their findings.
Co-author of the study, Mario Garcia’s book on tablet design.